Whoops, I inadvertently disappeared again. But I am here to, for once, post about an LE in a somewhat-timely fashion! Revlon Divine is part of the Evening Opulence collection for Fall 2013, designed by Gucci Westman.

The collection includes another 3 colors: Rich (which looks just like Carbonite), Elusive (a black/teal glitter that looked AWESOME in the bottle, not so much in swatches), and Seductive (a deep purple jelly). I really wanted to like Elusive, especially since in the bottle, it looks like a teal version of Facets of Fuchsia, but nope. It dries matte, which isn't a big deal, but the base is so opaque that a lot of the glitter gets lost, and the result is just sort of lumpy. Top coat is definitely an improvement, but I think I'd rather franken something similar that would be a better fit to my preferences.

Anyway, Divine! Divine might look familiar to you, as it's quite similar to Germanicure by OPI and my all-time favorite, OPI Royal Rajah Ruby! Here it is in the shade: 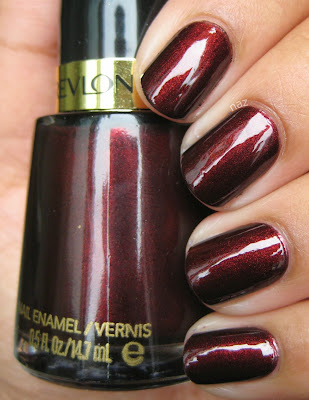 Dat shimmer! Here it is in the sun: 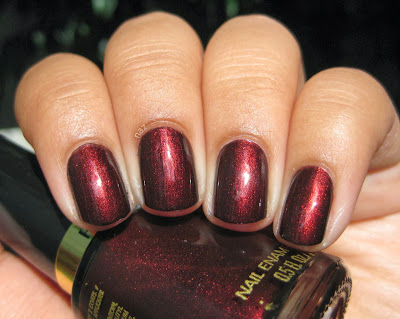 And another picture of the shimmer, because why not. 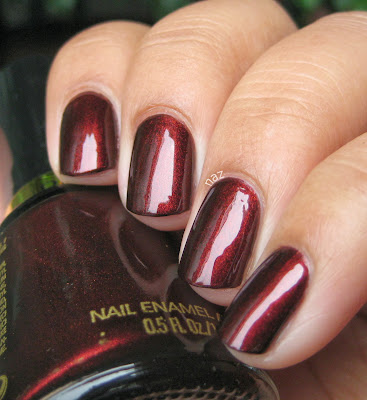 How great is that? I know, once again, not the most unique color on the planet, but I love it anyway. I probably won't have time to do a proper comparison to Royal Rajah Ruby, but I do have a swatch from last fall that I hadn't posted. So, for reference, RRR: 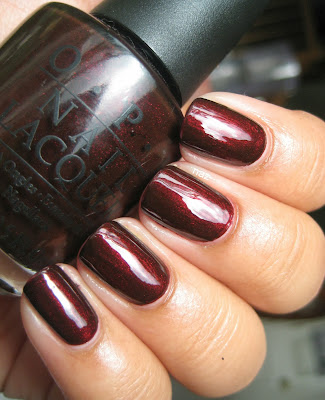 I think I can finally stop obsessing over backups, LOL.

On an entirely unrelated note, who else is preemptively freaking out in anticipation of Breaking Bad!? OMGGGGG. I don't think I've ever hated a fictional character quite as much as Walt. Maybe Schillinger. Or Adebisi. But Oz is chock full of unequivocally horrible people.

Have you tried Divine, or any of the other Gucci Westman colors? Were you as disappointed in Elusive as me?

Thanks for looking and commenting, and enjoy the rest of your weekend!
Posted by Naz at 7:19 AM

Happy Hands Am I Not Yours?

Happy Hands Am I Not Yours was released with the Faint of Heart collection for this past Valentine's Day. It's a dark, teal-green jelly packed with glitter. I actually took a bottle shot this time, just because I'm so smitten with the glitter mix. 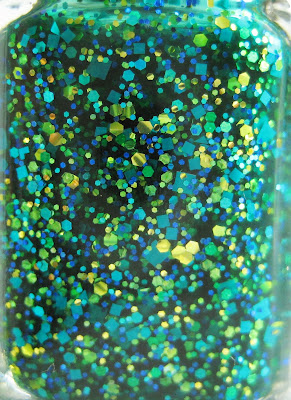 How cool is that? It looks pretty awesome on the nail, too. And sorry about the state of my cuticles- I wore this manicure the week before my presentation, which was full of stress and unfortunately, cuticle-picking. So my skin is looking pretty rough, lol. 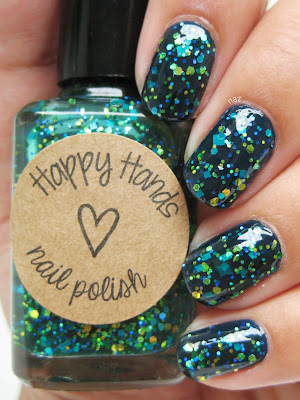 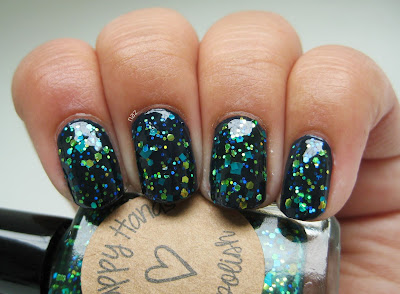 I've told you of my love for square glitter, so it shouldn't surprise you that my favorite part of this polish is the big teal squares. 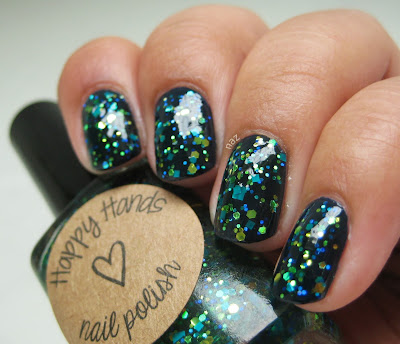 So, I've layered 2 coats of Am I Not Yours over 2 coats of American Apparel Passport Blue. It was pretty thick, so I'd definitely recommend keeping thinner on hand, and being generous with it. I had no trouble getting a good amount of glitter on my nails, which was great. This manicure looked so cool in person.

Have you tried any Happy Hands polishes? Thoughts?

Thanks for looking and commenting, and have a great weekend!

YSL Jade Imperial was released with the Arty Stone collection this past spring. It's a lovely jade green creme. I am weirdly picky about my minty greens. Off the top of my head, the only ones I can think of that fit my tastes are Sinful Colors Open Seas, Milani Dress Maker/Chanel Jade, and YSL Jade Imperial. Of course, I didn't actually decide I liked Jade Imperial until right after it sold out locally, and I'm not big on online shopping. I got lucky though, and the SA that was helping me said I could have the tester! Sure, it's missing the gold outer cap, but I don't care about that. The tester is in pretty good condition, and it's about 75% or 80% full, so needless to say, I am very happy. 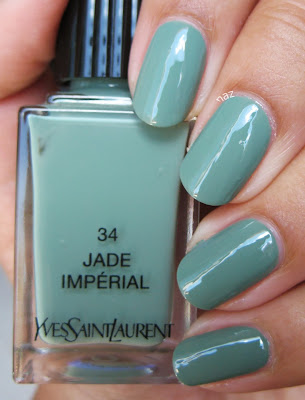 Now, onto the polish itself. Jade Imperial has a flawless formula. Almost perfect in 1 coat, super smooth application, dries shiny...I am in love. The brush is quite large, and I was a little worried about how that would affect the application, but I had no trouble. In fact, I didn't even need to clean this up. 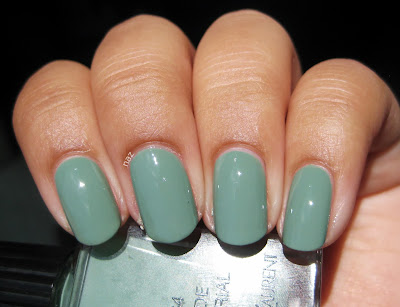 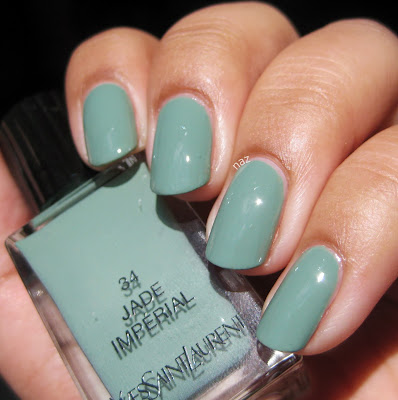 I did leave gaps that are a little too wide, but that's because I did my nails in dim lighting while dying watching HBO's Oz. I know I'm ten years too late on that show, but OMGGGG. Kirk Acevedo. Rita Moreno. Lauren Velez. Eamonn Walker. Dean Winters. BD WONG. And holy crap, JK Simmons. That guy has RANGE. Seeing him go between Jameson and Schillinger and that Farmers Insurance guy...damn. I have a hard time thinking of him as anyone other than Vern, though.

Thoughts? Did you fall in love with Jade Imperial too? I've pretty much heard nothing but raves about it. And what about Oz? Have you watched it?

Thanks for looking and commenting, and I hope you're having a great week!
Posted by Naz at 6:00 AM

Goooooood morning! I water marbled again, as you can see. 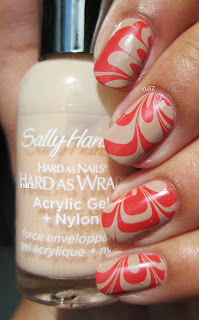 No top coat, because I am impatient and accidentally smeared the nails on my right hand when I applied it. Look: 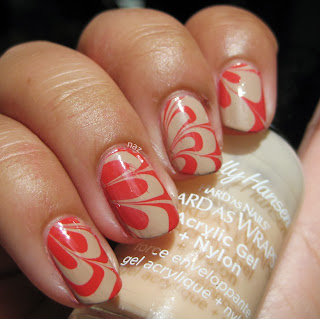 Smearing aside, I am pretty happy with how these designs came out! 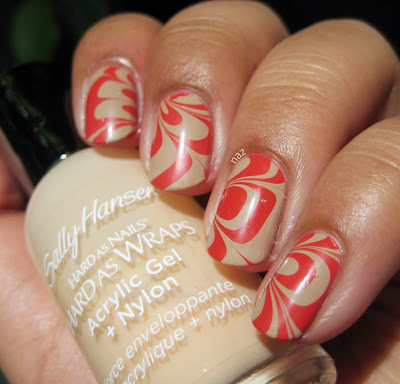 One thing that bugs me about water marbling: pretty much every time I do it, I get at least one tiny bubble. Here, you can see it on the ring fingernail of my right hand. It's tiiiiiny, but it bothered me, so I tried carefully popping it with the very tip of my cleanup brush, and of course, the base color now shows through. Oh well.

Thoughts? Would anyone happen to have any tips on avoiding those tiny bubbles?

Thanks for looking and commenting, and have a great week!
Posted by Naz at 6:00 AM

Butter London Victoriana was released in Fall 2010, along with Bumster, Marrow, and All Hail the Queen. Victoriana and All Hail the Queen have been getting a lot of love from polish addicts since their release, and while I had admired swatches, I didn't really get the hype. I still don't have any particular feelings about the latter, but the silvery shimmer of Victoriana sucked me in, and I finally caved. 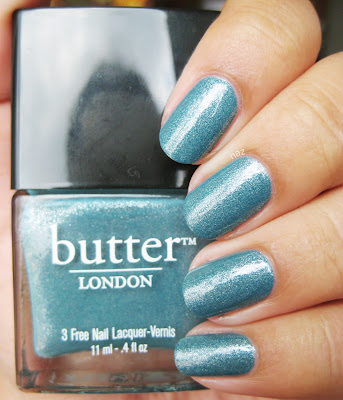 I have to say, I am really impressed with the formula. Victoriana was almost perfect in one coat, but did need a second. I barely had to clean up this mani, and both the wear and drying time are great. 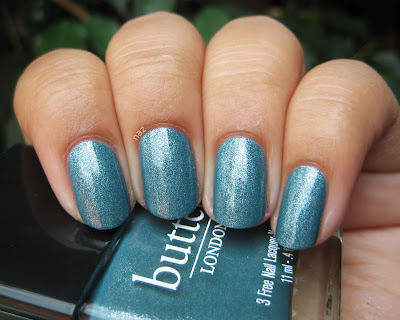 Actually, I bought this while I was still in a cast, and it was so easy to apply I wound up wearing this for quite a while. I can't remember whether or not I had used top coat when I took these photos, but I remember noting that Victoriana dried pretty glossy, which is nice. Here it is in the sun: 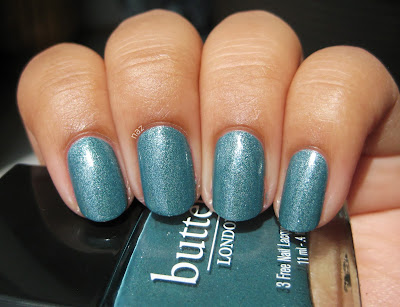 So pretty. You know by now that I love a dusty blue, and this is just great. 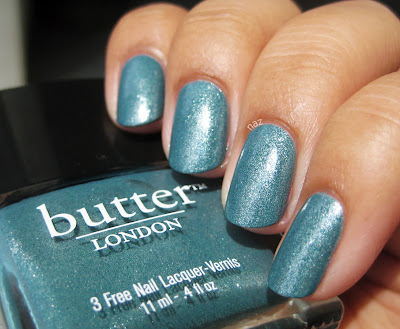 As far as I know, Victoriana is fairly unique. OPI I Have a Herring Problem and Zoya Skylar are similar, but the OPI and Zoya both have different colors of shimmer, and I think Victoriana's base has just a bit of teal in it that also distinguishes it from the others. Now that I think about it, I do own OPI I Have a Herring Problem, so I could have just compared the two myself. I'm lazy, but if you'd like me to do the comparison, let me know and I'll be happy to!

Have you tried Victoriana, or any of the other similar colors? Thoughts?

Thanks for looking and commenting, and have a great weekend!

SHCSM Greige was not released with a particular collection, as far as I know, but is one of the new-ish colors released with the revamped Complete Salon Manicure line. I'm not sure why they felt the need to revamp it, as the two new ones I've obtained have the same formula as my older ones...but whatever. Greige, as you may have guessed...is a greige creme. 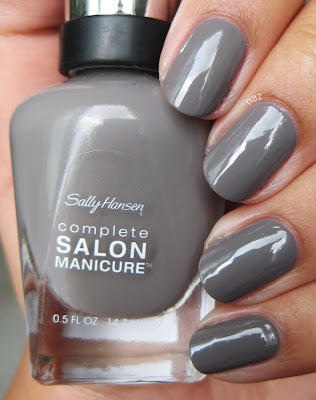 It sort of annoys me that the label on my bottle is so crooked. But the formula isn't bad. It's not great, a thick 3-coater, but it's not that bad. 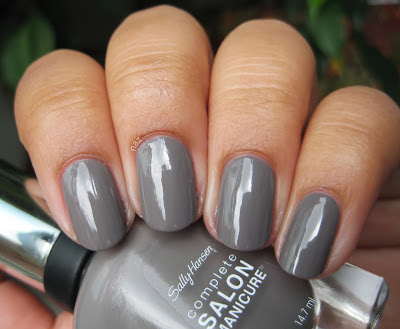 This is among the colors I got so I would have things to wear to work that wouldn't bore the bejeezus out of me. And I have to say, I do like this one. I always thought I had to stick to cool-toned greys, and avoid taupe-y colors, but I feel like this one is working for me. 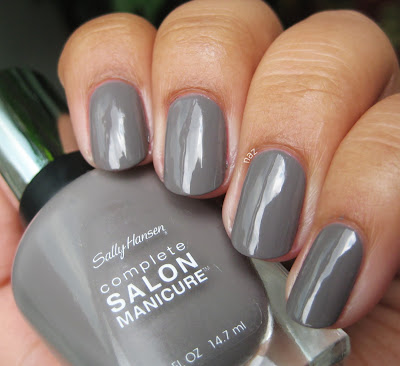 It's also quite glossy alone. I didn't use top coat here. Oh, and I should note that this is quite different from SHCSM Greige Gardens. Greige is darker, leans slightly brown, and has no purple in it whatsoever. Greige also has a better formula, but I like both colors.

Once again, this isn't the most unique color. The first similar one that comes to mind is Essie Chinchilly, which looks a bit lighter and just a smidge more brown. Same goes for American Apparel Mouse. You probably won't go wrong with any of the three.

Have you tried Greige, or any of the other new-ish SHCSMs? Thoughts?

Thanks for looking and commenting, and I hope you're having a great week!
Posted by Naz at 6:00 AM

Miami Beet is from the Spring 2009 South Beach collection. It's a vibrant, glossy magenta creme. 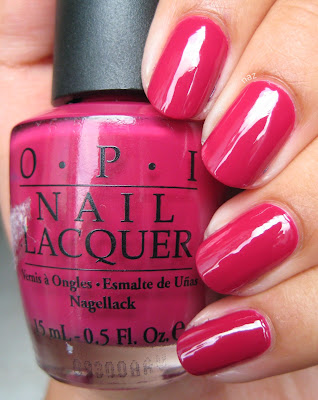 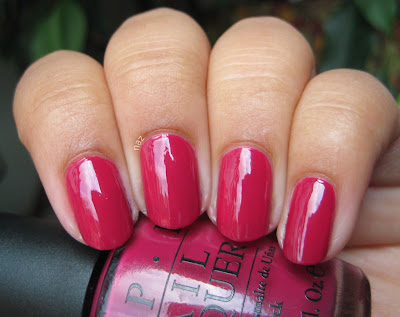 I have to say, the formula on this one is really nice. It's thin and smooth, like a jelly, and it's perfect in 2 coats. 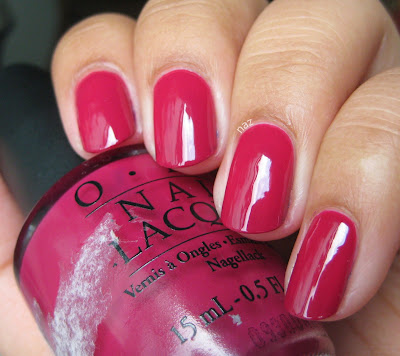 Just look at that shine! No top coat. I am currently rocking this on my toenails, and it looks fantastic.

Have you tried Miami Beet? Thoughts? What kind of colors do you like for your pedicures?

Thanks for looking and commenting, and have a great week!
Posted by Naz at 6:00 AM